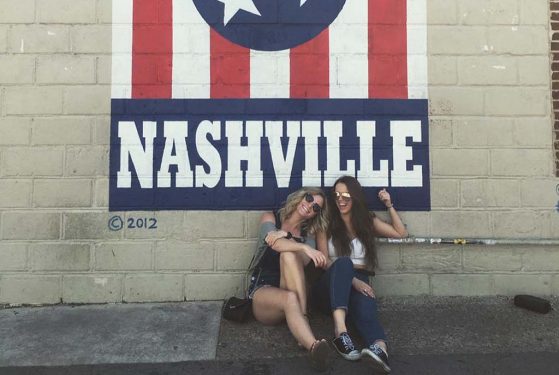 My Trip to Nashville

I don’t even know how to begin this story.  It was a mess at the beginning really.     So maybe that’s where I should start because it will only just get better from there.

It was 3:30am, Monday morning of April 15th.  I had 3 hours of sleep because I went to bed at 12:30am since I was up late performing at the Roxy Cabaret in Vancouver.  I felt sick when I woke up, as I usually do when I don’t get enough sleep, and couldn’t wait for my coffee once I was at the airport heading to Nashville.   I gave myself 2 hours, as you’re supposed to do before an international flight, and went through customs as a zombie.  My first flight was from Vancouver to Denver, Colorado, and I had been hoping to sleep on my flight.  Unlucky for me, after my coffee that morning, I was wide-awake.  I landed in Denver around 9:45am and was supposed to take off on my next flight at 1:00pm for Nashville.  So I thought to myself, I’ll go walk around cause I’ve never been here and I’d like to explore.  Well that 1:00pm departure time got pushed back a half hour, then an hour, then a couple more hours.  Until it was 5pm and I was about ready to smash my face into a wall.  The delayed flight was apparently because of some crazy weather happening somewhere else and our plane wasn’t showing up because of it.  I decided then to finally have a glass of wine, because what on earth are you supposed to do in an airport for that many hours waiting for your flight?  Well at 7pm they finally announced that the flight had been cancelled and we were rescheduled to fly out the next morning at 6am.  I cried, I called my mom and my boyfriend, needing some comfort in my exasperating day.  At this point I had no sleep, bad food, too much coffee and a bad attitude.  Thankfully the airline I was with put me up in a hotel and gave me food vouchers.  I tell ya, that night was the best sleep of my entire life.  I don’t think I’ve ever wanted a nice soft bed more than I did then.

The next morning was great, the flight left on time, got into BNA at 10am and it was sunny and beautiful when I arrived.  My hosts at the airbnb were great; they even picked me up from the airport.  I spent the morning grocery shopping at the Wal-Mart down the street and napped for about 2 hours.  That night, Tuesday, I went out to the bar, Tin Roof, by myself.  I’m a very outgoing and independent person, and going out to see a writers round alone wasn’t scary.  I got there early, but there were  no open tables available so I found the biggest table in the building, that was occupied by these two girls (and I say girls as in people my age, not like 12 year olds haha) I introduced myself and we became friends.  They were both originally from out of town but now lived there, and I told them I was a Canadian who just flew in that morning.  That night I saw and heard amazing song writers, got to sing myself at a bar up the street, and meet Chris Young, with whom I got a photo with.

The rest of my time went by in a blur I feel like.  A few of my co-writes I had set up before I got there were cancelled or postponed, but I made connections to write with other people.  I went out almost every single night to a songwriters round, a friend performing or just to see and feel music.  I got a taste of what it would be like for me to live there, and I got to say, it felt good.

One of the most exciting things for me while I was there was having the opportunity to sing at a songwriters circle.  It was Sunday night, downtown Nashville, just off Broadway at a little bar called Alley Taps.  I know the host of the writers round and I contacted her before I got there (she’s also Canadian).  My friend Nicole and I had just got into our new airbnb together that day, only 8 minutes up the street, and we were both in the writers round together. So we took an uber with our guitars and headed downtown.  We were about an hour early so we found another little bar up the alleyway and had a drink and listen to great music.  Nicole and I were both in the first round of the writers circle which was super fun.  I got to sing some of my older songs, and some of my new stuff that not a lot of people have heard.  Although it wasn’t a big crowd, and there was no one there to sign me to a label company, it was exhilarating being part of something that makes Nashville, Music City.  We had people tip us (which went to buying ourselves a drink afterwards) and received great feedback when we were done.  It was a great experience that I’ll never forget.

By the time I left Nashville I was plump with fried chicken, fried pickles and fried green tomatoes.  I made new friends who I’ve still stayed in contact with.  Had way too many late nights, which gave me a fresh take on life as a musician, and an appreciation for music outside of the genre of Country.  I was inspired and not ready to come home.  I love Music City, and I love the state of Tennessee.  I could definitely live there, it just felt like home.

Sooooo excited to have another live show! I’m pl

Yesterday I celebrated releasing my EP with a spar

I originally wrote this song on the mandolin when

You guys. This song means so much to me. It’s my

Seriously missing this already and it’s only bee

2020 has been the most stationary year I’ve had

New music is coming soon guys, and I gotta say, it

My favourite view is with you (cheeeesyyyy but tru

Holy Hay Bales! I’m so excited to be nominated f

Friday night was my last summer performance, and I

THANK YOU 🙏 from the bottom of my heart, thank

I originally wrote this song on the mandolin when I was gifted it many years ago. This song has carried me through the years as being my positive, happy go lucky song and has brought a lot of joy to my life. My hope is that you can connect with it and find some happiness even in the hard circumstances we find ourselves in. ... See MoreSee Less

Melissa Livingstone is in Canada.

You guys. This song means so much to me. It’s my favourite from the EP. A lot of you have heard it live over the past 3 years and I’m so unbelievably happy it’s finally getting put out into the world 🤍 pre-save link in bio
.
.
.
.
.
.
.
.
.
.
#illholdyou #newmusic #countrymusic #follow #cantpleaseeveryone #country #thanksgiving #thankfulformusic #sneakpeak #video ... See MoreSee Less